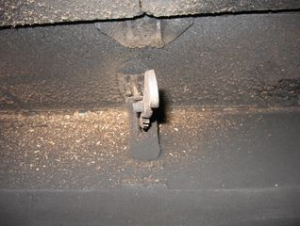 The damper is a vital part of the functionality of your fireplace. This is necessary to both exhaust the smoke and harmful by-products of combustion to the outside, and also to keep the outside elements from coming back into the home while burning.


A basic masonry damper (right) is the most common type of damper. This is built into the fireplace when it is originally constructed, and you would open it when starting a fire.


Because it is completely made of cast iron, often the door itself will not seat properly over time, or it may warp. The handle construction will also tend to get jammed over time, and become difficult to open and close the damper.


Because the damper frame is most often built into the masonry structure of the fireplace, it is very difficult to change the damper when an issue arises with it. For that reason, we often suggest to go with a top-mounted damper. 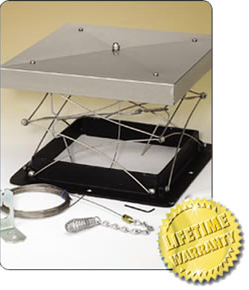 A top-mounted damper attaches to the top of the chimney flue, and offers several benefits as compared to a basic masonry fireplace.


The damper opens and closes by a cable which is run down the chimney to the fireplace opening. There, it attaches to a clamp which holds it in place. This way, when you are ready to burn a fire, you will simply need to adjust the cable right at the fireplace opening, rather than reaching inside the fireplace to the masonry damper handle.


Because the damper is mounted on top of the fireplace flue, and seals the chimney from the top, the masonry damper at the base of the flue can stay open or even be removed (recommended with a glass door front). This allows the entire chimney to stay at room temperature, rather than being cold from the outside air. This makes starting a fire much easier as the chimney is already warm, and will create an easy draft, rather than trying to reverse cold air pressure in the flue. 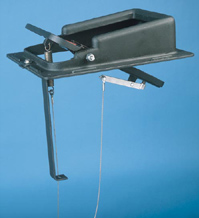 Top-mounted dampers come in two styles. The Lock-Top damper (above) is a stainless steel cover for a single flue, which mounts with a cast aluminum base.

The Lyemance Damper (right), is made entirely from cast aluminum, and uses a power-level assist to open.

Both dampers are designed with silicone rubber sealers, so that they seal tight on top of the flue, keeping in furnace heat as well as air conditioning. Both easily mount on top of a flue tile, can be installed with a chimney cap, and offer a Limited Lifetime Warranty.